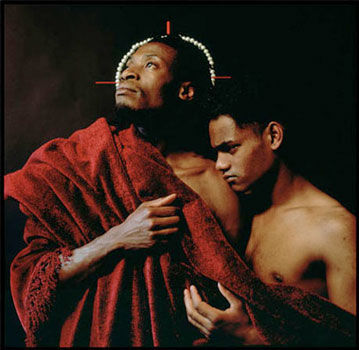 (1955 Lagos, 1989 London)s As an African artist whose work engages issues of diaspora and projects multiple subject positions, Rotimi Fani-Kayode often described himself as an outsider in three distinct ways; within his African family which navigated modern Britain with a traditional spiritual identity, as a gay man in an intolerant black community, and as a black artist in a racist society:

“My identity has been constructed from my own sense of otherness, whether cultural, racial or sexual. The three aspects are not separate within me. Photography is the tool by which I feel most confident in expressing myself. It is photography therefore — Black, African, homosexual photography — which I must use not just as an instrument, but as a weapon if I am to resist attacks on my integrity and, indeed, my existence on my own terms.”

Rotimi Fani-Kayode was born to a prominent Yoruba family in Lagos, Nigeria in 1955. His father—Chief Remi Fani-Kayode—was a respected high priest and notable politician. Indeed the Kayode family was well regarded for their spiritual responsibilities in their hometown of Ife, a sacred city in southwestern Nigeria regarded as the spiritual center of Yoruba culture. But when a military coup and civil war threw Nigeria into turmoil in 1966, Fani-Kayode and his family moved to England and settled in the seaside resort town of Brighton. He continued his education there until the age of twenty-one when he traveled to the United States to further his academic career. While his desire was to study fine arts, he compromised with his parent’s wishes for him and also studied economics. After receiving a B.A. from Georgetown University in Washington D.C. in 1980, Fani-Kayode moved to New York and completed an M.F.A. in fine art and photography at the Pratt Institute in 1983.

It was during his graduate studies that Fani-Kayode began making iconic and dramatic color portrait photographs of himself and other black men, nude or dressed in traditional Yoruba clothing. Such images laid the important formal and critical framework for his later photographic works, which explored issues of race, masculinity, homoeroticism and nationality, often involving a sophisticated and ambiguous mix of African and Western iconography. Upon his return to England after completing his graduate studies in 1983, Fani-Kayode met his partner photographer/filmmaker Alex Hirst, and began an important personal and collaborative relationship. The two moved to London, and Fani- Kayode continued his focus on part-autobiographical and mythical portraits; pursuing the theme of the male black body as a subject of desire.

Although his work is sometimes regarded as similar to the early 1980s work of American photographer Robert Mapplethorpe, in truth Fani-Kayode’s work pushes beyond simple references to gay iconography. Indeed many of his photographs such say as much about postcolonial issues and racism in contemporary British society as they do about gay sexuality. In this regard it is useful to remember that Fani-Kayode’s career span in the 1980s coincided with the years of political leadership by Prime Minister Margaret Thatcher; a conservative tenure that witnessed several race riots in Britain. In response to his personal experience and social environment, in 1987 Fani-Kayode co-founded the London- based organization Autograph, The Association of Black Photographers, a group that remains vibrant and active to this day.

In the same year Fani-Kayode published his first book Black Male/White Male (1987); a collection of photographs comprised of intimate portraits made in the early to the mid-1980s, including an image of American writer Essex Hemphill, and accompanied by text by Hirst. The photographs explored formal aesthetics of color photography in a dynamic manner and also challenged stereotypical views on race, interracial relationships and sexuality. Photographs from this period also recognize the photographer’s own spiritual background as an integral part of this investigation. In Bronze Head (1987) the bust of a Yoruba god, customarily seen as signifying an artist’s spirit, is portrayed in an image of sodomy. In trying to reconcile the notion that the traditions of his Yoruba culture reject homosexuality, Fani-Kayode attempted to create images that rejected profanity and instead provoked contemplation of sexual desire and the act of creation as positive, beautiful concepts.

Another example of Fani-Kayode’s complex postmodern style can be acknowledged in the part-autobiographical image White Bouquet (1987). Here a standing white man presents a bouquet of white flowers to his black lover, who lies on a white chaise lounge. Both men are nude and anonymous; their faces are unseen. The lighting is soft, setting a sensual tone within an ambiguous scene, which points to the powerful rhetoric of much of Fani-Kayode’s work. He presents an intimate moment that can be interpreted several ways, as a homoerotic encounter or a subversive comment on the racial power relationship associated with colonialism. Additionally, in its conceptual reference to Edouard Manet’s painting Olympia (1863), the image highlights the artist’s sophisticated knowledge of European art history. Images from the Communion series (1989) display a similar sensitivity and theoretical subtlety in the treatment of the male nude, in what Kobena Mercer has characterized as an exploration of the relationship between erotic fantasy and ancestral death. Communion is a group photographs that appear to have been a very personal and final collaboration between Fani-Kayode and Hirst, which were never exhibited while they were both alive. Fani-Kayode died from AIDS in 1989; Hirst died from HIV-related illness three years later.

Although his six-year professional career may be regarded as brief, Fani-Kayode’s art-making was intensely personal and politically engaged. The significance of his work was consistently overlooked during his lifetime, probably due in part to the controversial nature of his chosen subject matter, but also because of debate about the authorship of several of his photographs, despite consideration of the genuine spirit of collaboration he and Alex Hirst shared. Discussion of Fani-Kayode’s work in Hall and Sealy’s Different (2001) and the inclusion of his photographs in exhibitions like the 50th Venice Biennale in 2003 point to recently renewed interest in the Nigerian’s work by curators and historians who understand his significant role in having helped shaped various critical discourses in British photography of the late twentieth-century.